The other day Blake was playing in the backyard and he let out a scream. He and Derek where playing on the swing set and he took a huge fall. Blood was pouring out of his nose and mouth and he told us he thought he broke his arm. He landed pretty hard on some nasty rocks. After we cleaned him up and he settle down it was hard to tell how injured he was. Blake described it on the boys blog.
http://derekandblake.blogspot.com/
We even took some reenactment photos. If you haven't seen their blog I think it's very entertaining and they would LOVE to see comments.
It was still hurting Blake pretty badly the next day so we took him to have an x-ray. Sure enough he has a buckle fracture. Derek had a similar break about this time last year. (However, he had much more immediate swelling so it was obvious it was broken.) I actually think Blake was proud to have a broken arm. The doctor choose to wrap it up and wait for the swelling to go down before he put it in a cast. Blake came home from school that day with a bunch of signatures on his bandage (not a cast) including the school principal. today he got his glow in the dark cast. 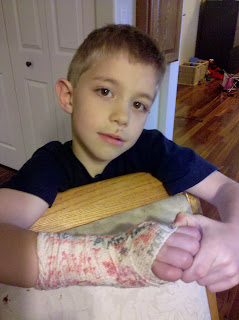