Can You Fix Something That's Already Perfect?

Yesterday we met with the plastic surgeon about our beautiful Katelyn's lip. The hemangioma that developed on her lip shortly after her birth has been treated about as much as it can be. She has been on systemic steroids for it, her lip has been injected with steroids and then the it almost completely resolved after starting her on a propanlol, a blood pressure medication which was very recently discovered to help infantile hemangiomas.


Although we rarely notice what is left of the deformity on her lip, we know others do and that it will be a problem in her future. People sometimes will comment that she has something on her lip thinking we just need to clean her face and other kids will sometimes try to pull it off. The older she gets we know this will be an even bigger issue as she becomes more aware of it.


So with the recommendation of our wonderful dermatologist Dr. Parkinson who cares a lot about Katelyn, we went to see a very well respected plastic surgeon who has many years of experience. When we arrived at his office Brent almost immediately noticed several sculptures of Brent's Great Uncle Avard Fairbanks in the waiting room. It was a pretty impressive collection and then we connected the doctor's name to the collection. We were there to see Dr. Grant Fairbanks. So he turned out to be Brent's dad's first cousin. Such a small world! He knew Brent's grandpa as Uncle Ellis and commented on his love of life. It was fun to talk Fox family history with him for a few minutes. Grandpa Fox was so proud of his sister's husband. He traveled with the two of them to Italy when he was a young man while Avard was studying sculpture. It was clearly a high point in his life and he reminisced about it frequently. 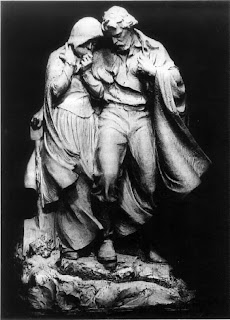 So the son of the man who created sculptures like this, now sculpts bodies in the flesh. He thinks the only course of action is to surgically remove the hemangioma from Katelyn's lip. He is unsure about the timing of it because while her youth is in her favor as far as healing and scarring goes, the bigger she is and the more lip she has to work with, the more successful he feels it would be. So he wants to see us back in a month or so and then decide. He was very clear with us that surgery creates scars and that is what we should expect. I don't know where this is headed, but I feel like we are embarking on a very significant journey in our little girl's life and the weight of it in my chest is palpable. We have to start seeing what we don't see and don't want to see.
Posted by littlefox at 9:02 AM