Things are going great for Brandon. We continue to see physical therapists but Brandon is making GREAT progress. It’s not really because of anything we do but it’s mostly because he so incredibly determined. This determines gives us great hope. At the same time it can be really hard on everyone when he gets frustrated. There are times when he just wants to stand. He screams (and he finds an annoying pitch) when we put him on the ground and he screams when we hold him. However, is really happy to be standing. His face lights up. The problem is that he doesn’t have good balance yet and he can’t hold himself up for long, even when standing next to the couch or some other support. He needs one of us to hold him up or at least be ready to catch him. This can be really hard for us when he wants to do it for long periods of time.

In the last couple of months Brandon has really gotten much better at crawling. One thing he does really well is use his left hand to support his weight. He gets up on all fours. This is a really big step. His left hand still lags behind a little but he’s making improvement fast. He also often uses his left hand to hold his food and then rips pieces off and feeds himself with his right hand. Again this is a great sign of progress. Just in the last couple of days he gotten much better at pulling himself up. If he finds something at the right height he can use his right hand to get himself to his knees. He often topples over as he tries to get his left hand up but he getting much better. When it works he is incredibly pleased with himself. He will work at this for a long time without quitting, even if he gets frustrated.

He is still too small and we do all we can to supplement his food and give the highest caloric input as possible. He is still on an appetite stimulant to try and get him to grow.

The most important thing to know about Brandon is that he is such a happy kid. He smiles all the time and he loves to snuggle and give hugs. Every morning at breakfast I have to stop multiple times to let him hug me. I have to be careful because he often has a dirty face. 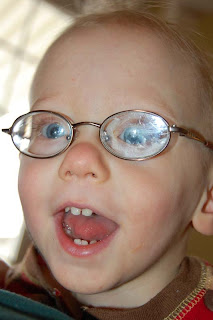 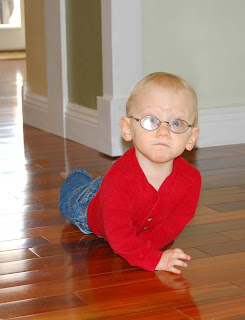 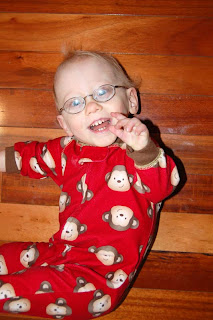 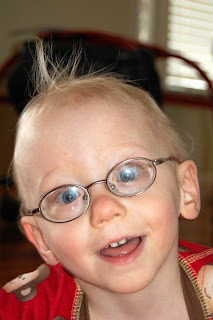 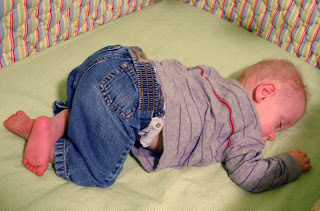 This is how Brandon likes to sleep. It's very cute. he also babbles when he is really tired and about to fall asleep. 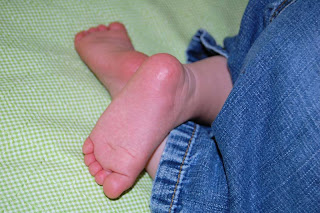 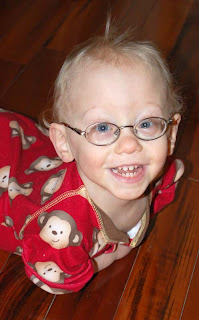 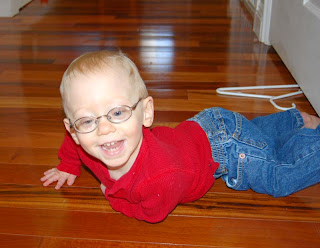