This has been a very long week for our family. One that has reminded us just how fragile our little ones' bodies are still. Katelyn woke up from her nap on Sunday with a fever and within an hour was throwing up. The diarrhea started soon after and by Monday morning she was very lethargic and not keeping anything down. She was starting to show signs of dehydration and so I took her in to the doctor. Of course she perked right up for him but he said if she was any worse by that night I would need to call him for her to go the hospital to get some iv fluids. So we waited and although she finally did have a barely wet diaper, she could barely stand, we couldn't get her almost 104 fever down any lower than 101 and she was refusing to eat or drink anything. So we called our pediatrician back and went down to the hospital for fluids. We were surprised when he said that she would be admitted. Somehow I thought this was a simple outpatient thing that would only take a few hours. Boy was I wrong! We were there 3 nights and I think I realized just how bad it had been when I rejoiced in seeing her adorable smile for the first time in a few days on Wednesday night. During the worst of it her eyes were barely open, she wouldn't talk except to say no and she was limp and burning up. But she did improve and we brought her home Thursday, just after we found out what had been ravaging her tiny little body - rotavirus (a nasty GI virus). But by Friday she had stopped eating and was not drinking much and not having wet diapers, still having diarrhea and started throwing up again. I took her back in and the doctor said we were on the border again. But we also found some big sores in her mouth that would make anyone not want to eat or drink so now we're treating that with some lidocane and more anti-nausea medicine. So today is the day we are hoping to turn things around because if we don't she's headed back tonight. She ate a little breakfast and drank a little too but then filled a diaper. We'll see how things go today. Thanks for all the prayers that have already been said for her. 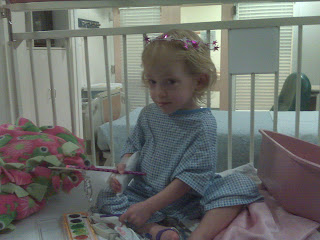 Princess Katelyn doing some watercoloring in the crib. 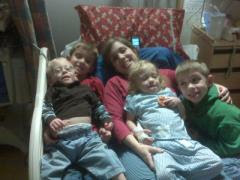 The first family visit. She was so happy.

Posted by littlefox at 8:17 AM