It’s been a long month!

It’s been a long time since we posted and a lot has been going on. I’ll give you an update on all the kids. 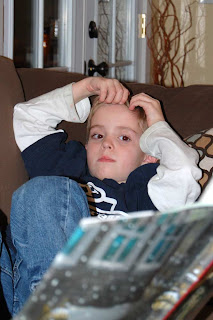 A few weeks ago Derek was complaining of tooth pain so we took him to the dentist and he didn’t have just one, but two cavities! I was really a little surprised because he’s a pretty diligent tooth brusher. His two front teeth on the bottom were also loose and had been for a while and the new teeth were growing in fast so they decided to go ahead and pull them. He was so brave; in fact he didn’t even flinch or squeeze the hygienists’ hand. They were all very impressed with him. He told us today that “his pregnant teeth were almost all the way in.” (He meant to say permanent.)… such a funny boy. He had been jealous for quite a while because he hadn't lost any teeth and Blake had lost 7! So having his teeth pulled actually turned out to be pretty gratifying because the tooth fairy visits the dentist office too! So he scored on those two teeth. The funny thing is Blake lost a tooth at school the same day, so they were both happy. He participated in the storytelling festival at school recently and told the story of the Freedom Bird in his class. He did well and we’re waiting to hear if he will go on to the competition for all 1st graders. 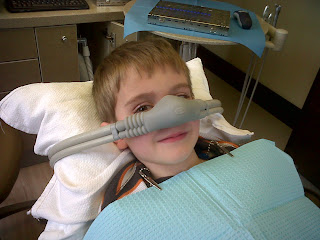 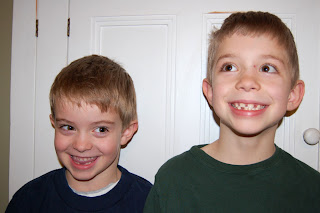 He continues to be a challenge and a delight to raise. The other day when I was picking the boys up from school I waited for more than 10 minutes for Blake and I was starting to get pretty concerned because I had received a call that morning that he hadn’t been in his first period class. When I called the school to follow up they said they thought it was just an attendance error. But I started to get nervous so I got out of the carpool line, parked the van and went in the school. They paged him twice and while I was waiting I saw his teacher who reassured me that he had been in school that day. He finally showed up about 20 minutes after school had gotten out and said he had been “looking into a potential flood.” Let me translate for you – there was a large puddle from melting snow on the playground and he had been looking at it and contemplating evaporation and drainage possibilities FOR 20 MINUTES! He also participated in the storytelling festival and did well. It was a little harder for him, but he did well and we should find out this week whether he goes to the grade competition. 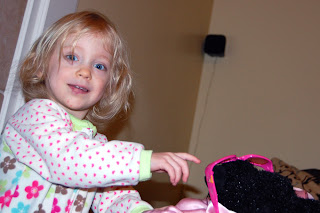 She is getting more and more articulate and frequently surprises all of us with the sentences she puts together. At a Valentine’s dinner at the neighbor’s house tonight she told one of the hosts “You go upstairs right now.” Most of her sentences are commanding but she is also very helpful and concerned about messes (most of which she makes!) She is completely better and the January illness is already a far distant memory. 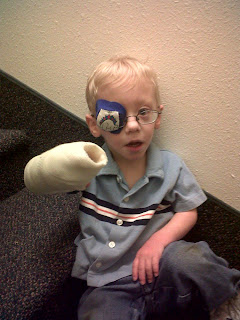 Life has been more eventful for than any other member of our family in the last few weeks. He is doing well – walking confidently, talking more and more and turning into quite the little prankster. He is a very funny and charming little boy. We have had many doctors’ appointments as of late and we have many more ahead. We followed up on his eyes a little over a week ago and were not surprised to find out that his lazy eye or strabismus has not improved. We were last given orders to patch his strong eye to strengthen his weak eye for one hour a day. However when he was learning to walk we stopped patching him because it was just too much for him to mess with his depth perception when he was working thru so many other things. His eye doctor changed the prescription in his weak eye to a stronger lense which helps correct the strabismus and told us to patch him 4 hours a day and gave us one more month to see if we can avoid eye muscle surgery. He is tolerating his patch very well though and I am confident that we are doing all we can so we’ll see what happens.

Brandon tolerated his botox well on Friday. They did 5 injections - his pec, his bicep, his tricep, his pronator, the muscle that causes his wrist to turn out and his thumb. No major difference yet, but it can take several days to take effect. But it was so effective last time that I am very hopeful. 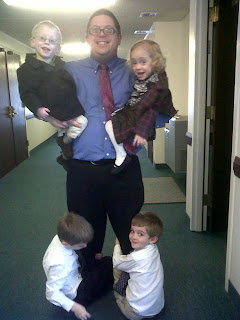 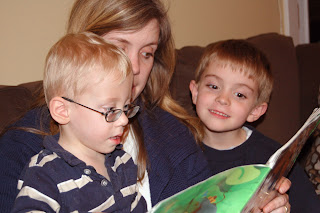